Our older two children had been sick for a couple of days. The throwing up kind of sick that is a complete mess of laundry stacked to the ceiling?and empty bowls strategically placed throughout the house just in case the run to the bathroom is too far. It should have felt like we were in a complete mess, but it didn’t this time for some reason. We had spent a few days cuddled up on our couch watching movies and we were finally on the mend.

I remember putting Lexi and Hunter to bed and then sitting on the floor with Tate. He had popsicle sticks with pictures on them that we would play with, they were a gift from one of his therapists. There was a bee, a train, a bus, a star and his favorite a spider. Each image was my cue to sing another song to him. He loved to do the actions to the songs and always gave me the best “Yay!!” at the end of each song. ?We played on the floor for a long time and then it was my favorite time of night with him when I got to sit in the recliner and cuddle my sweet boy.

I am a horrible sleep trainer, ask my husband! Tate always fell asleep in my arms. I remember holding him that night, kissing him over and over, telling him how much I loved him, and stroking his soft cheek with my finger. This was not anything different from our other nights together, except on this night our little Tate would not close his eyes and fall asleep. He was calm and peaceful, but he would not go to sleep. He just sat contently staring up at me. After a few hours of this, I was an exhausted Mommy. I decided I should probably go lay him down in his crib for the night. I got him all tucked in and set up his feeding tube for the night. Then gave our baby boy a kiss on the forehead and laid down in our bed that was five feet away from his crib. Even with his crib only five feet away we still had a video monitor set up on my nightstand (overprotective mother I guess?) and I laid there staring at our little guy who would not close his eyes that night. I’m not sure how long I laid there staring at him, but eventually, my body gave in and I fell asleep.

Like I said before, I am an overprotective or maybe paranoid mother. Tate slept on an angel mat that was set to alarm if he stopped breathing. At about 3:30 am that angel mat alarm went off. Now, you think hearing that alarm in the middle of the night would set off complete panic in a mother. But my Tate’s feeding pump alarm went off in the middle of the night every night, so I calmly got up to turn his alarm off. Then I realized the alarm going off was not the feeding pump, it was the angel monitor.

I quickly reached for Tate’s hand…it was cold. I moved my hands up to his body and found that his body was still warm. I whispered to Travis, “Babe, I think something is wrong.” Normally it takes a lot to wake Trav up, but not this night. He was up as soon as I finished whispering and quickly lifted Tate out of his crib while telling me to call 911. I turned to my nightstand, grabbed my phone and ran out of the house across our yard and started frantically knocking on our neighbor’s door, he was a fireman and I wanted to get Tate help quickly. I think Trav must have thought his wife had completely lost it and had no idea where I was going because I didn’t explain to him where I was going I just ran. I spoke to the 911 dispatcher while my neighbor opened his door and ran with me back to our house. He had Trav lay Tate on our kitchen table and started assessing Tate. He looked up at me and I knew instantly what he needed. I told him I had an infant CPR mask and ran to my bedroom closet to grab the mask that had not been used or thought of since I was in college. I ran back to him with the mask and he began CPR. All of this happened in about two or three minutes.

Then the house filled with paramedics, firemen and police officers. Our neighbor, Fireman Jeff (as my kids call him), came up to me as I stood in shock watching them work on our boy and asked me if I could call our Bishop for some help. I stared blankly at my phone trying to process what was going on. Jeff could tell I was in no condition to figure out how to work my phone and called our Bishop. Then I remembered that Lexi, our oldest, had crawled into our bed that night and was probably all alone in there wondering what was going on outside. I asked Jeff to go sit with her and make sure she was okay. Our Bishop arrived with his sweet wife just as it was time to go to the hospital. He drove us to the hospital behind the ambulance that was carrying our sweet baby and his wife stayed to watch over Lexi and Hunter. Trav was able to call our Mom’s while we were driving and we pulled up to the ER.

Doctors and nurses ran at full speed doing everything they could to save our boy. I stood in the corner of that hospital room leaning on my husband knowing that both of us were praying with all our hearts for the same thing. As a parent, you would do anything for your child and I know that if either one of us could have taken Tate’s place that day to save him there would have been no hesitation. We would have done anything to save our boy.

I wish this story took a different turn at this point. I wish I could write that we prayed for him to live and we got a miracle. I wish I could post a picture of him as a five-year-old today running around with his siblings at the dinosaur museum wearing a little football jersey. But, like I said this day does not have the happily ever after line. I am the Mom who prayed for her son to live and asked God to not let him die…but my sweet 18-month-old baby died.

Before we drove away from the hospital that day Trav held me and told me that we had to make a decision right then and there. We had to decide if this was going to break us or make us stronger.

The main thing that Tate taught us while he was here was to be strong and brave no matter what the circumstances. He had some hard physical struggles in his short life and he always made the best of it. He was missing his left hand, but from the very beginning, he turned that into an advantage. I will never forget walking into the NICU to find my little newborn proudly holding his binky on his little nub.?He had to have both his legs put in casts at one point and instead of being mad or upset about them, he just turned them into musical instruments to entertain everyone around him. His surgery in the hospital did not go as planned and recovery ended up being much harder than expected, but he blew all the doctors away with how he bounced back not complaining nearly enough. Tate could not even physically smile, but he used his amazing laugh to let you know how happy he was.

That horrible day we chose to follow our Tate’s example and decided that breaking was not an option for our family. Somehow in our weakest moment, we had to find a way to let it make us stronger. What we didn’t realize that day is that?we would have to make that choice over and over again in our life as we grieved the loss of our precious Tate.

I feel like the last four years there has been a constant battle going on inside me between being bitter and being better. When your child dies it is easy to be bitter and honestly, no one looks down on you for feeling that way. It is completely justifiable. Our story did not go the way I wanted it to and I get really angry about it sometimes. But, at the same time, there are parts of our story that make it undeniable to say that God was not looking out for us that day or did not hear our prayers.

Our miracle is that somehow we got lucky?enough to be Tate’s family. I am so proud to be Tate’s Mommy and having him in my life, even for a short time, was a miracle for me.

There is a quote I love… 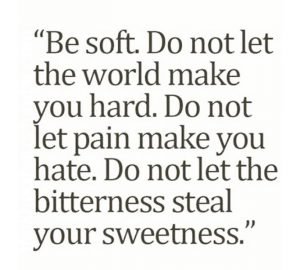 Four years ago I laid my baby Tate in his crib for the last time. Tonight as I tucked my other three kids into their beds I couldn’t hold the tears back. It hurts my heart that I only have three foreheads to kiss goodnight when I should have four. I hate that I have a prayer in my heart as I walk out of each of their bedrooms saying, “Please let them wake up tomorrow morning”. Days like today can be so hard.

Tonight I could be bitter, but I am going to choose to be better. I am going to stop and be grateful for the angels that have surrounded my family the past four years, both heavenly and earthly. I know I will still have those times when the bitterness will creep in, and that’s okay. But I hope that I can learn to let the worst day of my life give me the compassion and understanding to show love for others as they experience the hard things in their lives. 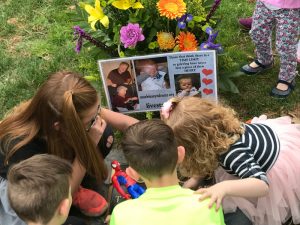 Sending hugs and kisses to heaven today for our sweet Tate! We love our little guy!