How I became the hunter’s wife…

I was seventeen years old and headed to a girls choice high school dance. I was doubling with a friend and we went to pick up her date first. I pulled into the driveway and my friend hopped out of the car to go pick up her date.

So there I am just sitting in my car waiting, when out of no where some guy dressed in full camo drags a dead deer across the driveway! I was completely traumatized and the guy dragging the deer knew it too. He made sure that he held the antlers just right, so the deer was facing me and I could see the blood dripping out of it’s mouth, he dragged it slowly and made sure to be as close as possible to the front of my car so I could see all the gory details. When I finally looked up at the guy holding the deer he was just smiling, thoroughly enjoying my terror. In my mind I was screaming, “Who are these people?!” My friend came out with her date and he told us the stories from that morning of how both him and his brother had shot deer. Poor Bambi!

Little did I know that one day my friends date would steal my whole heart and become my husband. That the crazy guy in the camo would someday be my brother-in-law. And that “those people” would become some of the most important people in my life.

You may be a hunter’s wife if you can relate to any of the following: 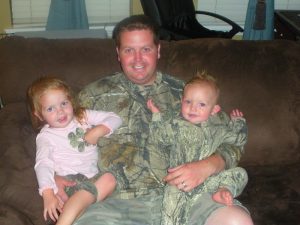 Shout out to all the women who have fallen in love with a hunter and can relate to this!

May hunting season be full of pedicures, chick flicks and clean washing machines!