Proud of my Strong little man!

There is something extra special about Hunter. We are best buds and he has always been my little sidekick. When I dreamed of having a son, I could have never hand picked a better son for me than Hunter. He loves everything I love (Okay, he allows me to brainwash him) and he truly is a cooler kid than I could have ever dreamed of being at his age.

His birthday is coming up and I have decided to share 3?ways that Hunter has taught me to Live Stronger. 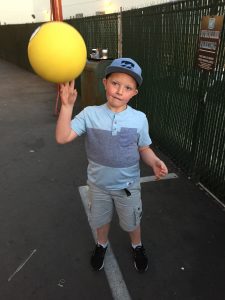 Recently we went on a trip to California. We were at Universal Studios and there was a basketball shooting game that Hunter really wanted to play. All day I told him it was a waste of money. I tried to explain that they rig the hoops to make it as tough as possible to make the shot.

He was very persistent throughout the day that I was wrong and he could make it. Finally at the end of the day I decided to teach him a lesson and let him try it. I gave him the $10 so he could have 3 shots to try and make it. Before he paid for his shots I made him watch all the people that were losing their money.

I made one last ditch effort to talk him out of it as no one was hitting their shots. He looked me right in my eyes, with a huge smile on his face, and bursting with confidence told me he has this. He stepped up to the line, paid his $10 and proceeded to hit 2 of the 3 shots.

I learned the lesson that day, never underestimate Hunter again.

When we told Lexi and Hunter what had happened to their brother Tate, Hunter burst out laughing as huge tears were falling from his cheeks. I could see how bad he wanted us to be joking. I could see how much he hurt, despite trying to laugh. Hunter has been and always will be my rock. As I watched Hunter laughing as he fought through his emotions I realized how strong he really is. 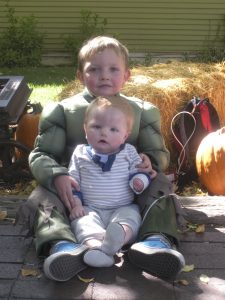 Hunter is the protector of our family. I can’t tease Brandi without Hunter quickly coming to her defense. Lexi and Hunter fight often, but no one else messes with his sister. Hunter took the role of big brother very serious when Tate was born. He watched over his brother constantly. Every day?we would find a new toy in Tate’s crib that Hunter had left for him to play with. He is the sweetest with Ali and she lights up anytime he is around. I love watching how much she adores him!

Losing Tate has been incredibly hard on Hunter. Hunter could care less that Tate was missing his left hand. He had figured out how Tate could play every sport with him.?He had huge plans for their life together. Hunter has been an example to me by how he handles the pain. He exemplifies what it means to Live Stronger every day. He has stood strong in situations that most people only face in their nightmares. He has had to grow up quickly while wiping the tears away for his Mother while I am at work. He is observant of people that are struggling and is always ready to lend a helping hand. 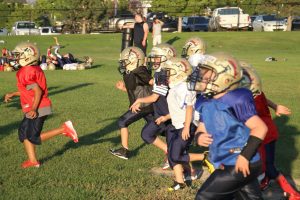 Hunter started tackle football this past week. I have done everything I can to try and get him to follow in my steps and play soccer, but there is no doubt he was made for Football. It is a new world for us, but it has been so much fun.

This is the first year they are allowing 7-year-olds to play tackle football in Utah. With his 7th birthday on August 17th, he made the deadline by two weeks. The 7-year-olds are combined with the 8-year-olds, so Hunter will be in the Scout division for the next two seasons. He is one of the youngest kids for his age group, but Hunter could care less about that. He gets right in there and mixes it up with anyone. He?started asking us when he could play tackle football when he was 4, so needless to say he was a little excited to get started.

Despite being one of the youngest kids on the field, he wanted to make the A team during tryouts. Brandi and I just wanted him to be on a team where he would get playing time and have fun, but he was serious about his goal to make the top team. He hung with them all week. In the end, he was one of the last players they moved down from the A team. I tried to console him by telling him that it was fine he wasn’t on the A team. Every player they took was a year older and much bigger than him. As his parent (and from the coaches perspective) it made perfect sense why he wouldn’t be on the A team this year. He just looked at me and said “But Dad, I wanted to play against the best players so I can get better”. This is Hunter.?He is a fierce competitor that doesn’t like to back down to a challenge.

I am so proud to call him my son and best friend. Happy birthday, buddy!